A Tennis Geezer Pleaser: Federer, Nadal to Renew Battle at Wimbledon after 11 years 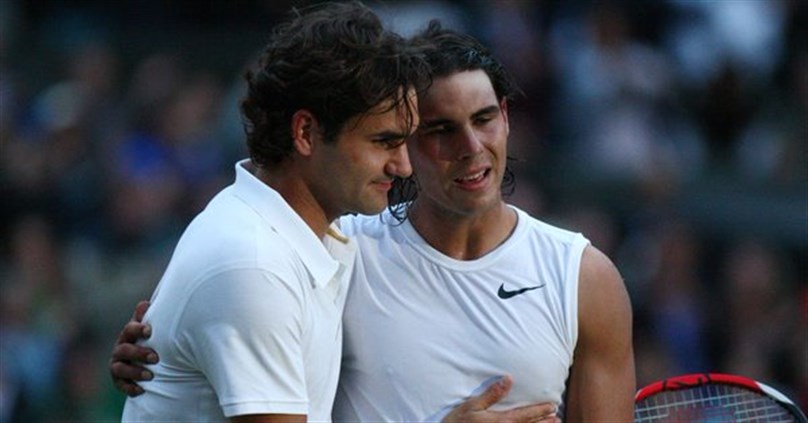 The last time Roger Federer and Rafael Nadal played a tennis match here—an unforgettable, twilight-finishing final in 2008—they were young opponents in their twenties, still ascendant and hungry, making a precocious case for themselves as two of the best to have ever played the sport.

Now the case is thoroughly made. Federer and Nadal are two of the best to have ever played tennis—no sane observer argues otherwise. They have 38 major tournament championship titles between them—20 for Federer, 18 for Nadal—and on Friday afternoon, they will return to the game’s grandest lawn to face off for the first time in 11 years:

Eleven years have passed since Federer and Nadal’s rain-delayed, five-set, no-fifth-set-tiebreaker epic, which Nadal wound up winning as darkness descended, 6–4, 6–4, 6–7(5), 6–7(8), 9–7. It was Nadal’s first Wimbledon triumph, and in the aftermath, Federer choked up on live television while being interviewed by John McEnroe, who offered a consoling shoulder to the defeated Swiss player. Johnny Mac proclaimed it the greatest match he’d ever witnessed.

Over a decade plus, “Fedal 2008” has taken on a mythical quality, like Reggie Jackson’s three-pitch, three-homer game in the World Series, or the Grateful Dead at Ithaca in 1977. A book (“Strokes of Genius,” by L. Jon Wertheim) and a documentary have chronicled the legend; people who weren’t there now say they were there.

Roger Federer has 20 career major championship singles titles, including eight at Wimbledon. PHOTO: XINHUA/ZUMA PRESS
In the meantime, there have been three U.K. Prime Ministers, three U.S. Presidents, three James Bond films, and seven seasons of “Celebrity Apprentice” hosted by you-know-who. Federer and his wife, Mirka, have had not one, but two sets of twins. There’s a roof on Wimbledon now; there won’t be a rain delay or twilight threatening to push the match to the next day.

It’s been a minute, as they say.

And yet Federer and Nadal are still here, still elevating the game, and still hungry, which probably says more about both of them than any statistic. Besides their accolades and earnings—more than $100 million each, and that’s just tournament winnings—both men are admired for their sense of sportsmanship and fair play.

They also both enjoy wearing a nice bandana.

Otherwise, they are a contrast in styles. Federer is the elegant statesman with the one-handed backhand and balletic footwork. Nadal is the swashbuckling baseliner with the heavy topspin groundstrokes and a take-no-points-off tenacity. They’ve evolved over time—Nadal’s added a better serve and return; Federer’s embraced a bigger racket and sharpened his forehand.

In recent years, the Federer-Nadal rivalry has yielded to admiration and friendship. The two have done events for each other; Fedal teamed up to play doubles in Federer’s inaugural Laver Cup tournament, and Federer recently revealed that Nadal will join him in a fund-raiser in Cape Town, South Africa, where they hope to set a record for fans attending a tennis match.

“He’s an intense guy on the court,” Federer said of Nadal in a recent video for Vogue, which is edited by his friend, Anna Wintour. “He’s super honest and open off the court, and he’s got a heart of gold.”

Nadal won a stunning 12th French Open in June, and is currently No. 2 in the world rankings, behind only Novak Djokovic. Federer sits at No. 3 (though he’s the No. 2 seed here, owing to his grass court record), and is playing as competitively at his age as any man who has ever played. Young opponents are often awestruck. Neither man has ever been more popular, as evidenced by the throngs of pilgrims who show up just to say they saw them in the flesh.

Rafael Nadal holds a 24-15 record in matchups against Roger Federer. Here was a moment, not long ago, when it seemed like we wouldn’t see much more Federer vs. Nadal. Injuries hit both men hard, forcing them to skip big chunks of seasons, and they consistently missed opportunities to meet each other in major tournaments (they still, amazingly, have never played each other at the U.S. Open.)

But lately, there’s been something of a Fedal-aissance. The two met in the final of the Australian Open in 2017, and since then, they’ve played four more times—a downright torrent of Fedal—most recently in Paris, on clay, where Nadal prevailed on a windy day in the semis. Prior to losing at Roland Garros, Federer had been on a five-match Fedal winning streak; overall, the record now stands at 24-15, Nadal.

Whoever wins will have another hill to climb on Sunday afternoon. At least we know this: In just hours, we’ll have Roger Federer and Rafael Nadal, once more, at Wimbledon, the cathedral of tennis, putting a bookend or at least a new chapter on one of the best rivalries in sports.

As greatness goes, it doesn’t get greater.