How powerful was the Beirut blast? 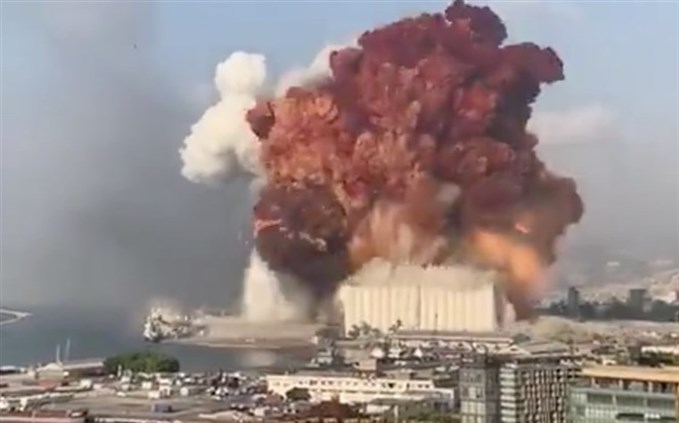 Experts estimate the massive warehouse explosion that sent a devastating blast wave across Beirut could be one of the strongest non-nuclear explosions ever recorded.

“On a scale, this explosion is scaled down from a nuclear bomb rather than up from a conventional bomb,” said Roland Alford, managing director of Alford Technologies, a British company that specialises in disposal of explosive ordnance. “This is probably up there among the biggest non-nuclear explosions of all time.”

Experts have estimated the size of the blast as being the equivalent of 200 to 300 tons of high explosives. Here’s what that figure looks like compared to other accidental explosions and conventional weapons.

The first nuclear bomb used in war. Dropped by the U.S., the bomb killed tens of thousands and flattened the Japanese city of Hiroshima in an instant.

George William Herbert, an adjunct professor at the Middlebury Institute of International Studies Center for Nonproliferation Studies and a missile and effects consultant, used two methods to estimate the yield of the explosion. One used visual evidence of the blast itself along with damage assessments. The other calculation was based on the amount of ammonium nitrate reportedly at the source of the explosion.

Both techniques estimate the yield as a few hundred tons of TNT equivalent, with the overlap being 200 to 300, Herbert told Reuters.

The blast rattled buildings on the Mediterranean island of Cyprus, about 100 miles (160 km) away.

A string of explosions
Seismological data suggests that six blasts preceded the main explosion, the last of them a combustion of fireworks that apparently set off a warehouse full of ammonium nitrate, an Israeli analyst said on Thursday.

The six blasts were at 11-second intervals during the Aug. 4 incident, with the main explosion following the last by around 43 seconds, Boaz Hayoun of Israel’s Tamar Group told Reuters.

Hayoun, a former military engineering officer whose current roles include overseeing safety standards for explosives use in Israel, said his analysis was based on data from seismological sensors stationed across the region.

“I cannot say categorically what caused this, but I can say these blasts were at the same location,” he told Reuters.

Readings from a seismograph obtained by Reuters showing the explosion in Beirut on August 4, 2020. IRIS (Incorporated Research Institutions for Seismology)

Among the sensors cited by Hayoun was an array installed about 70 km (43 miles) off Lebanon’s coast by the international geological project IRIS - which cast doubt on his conclusions.

IRIS said its sensors picked up more than five “small bursts” at intervals of around 11 seconds before the main Beirut explosion, a sequence that continued after the incident.

“I do not believe that they are associated with the large explosion in Beirut,” Jerry Carter, director of IRIS data services, told Reuters.

“They could be from a seismic survey,” he added, referring to geologists carrying out airgun bursts for underwater mapping.

Lebanese officials have blamed the explosion, which killed at least 172 people and left much of the capital in ruins, on a huge stockpile of ammonium nitrate catching fire after being stored unsafely at the port for years.

President Michel Aoun has said investigators would also look into the possibility of “external interference” such as a bomb, as well as negligence or an accident as causes.