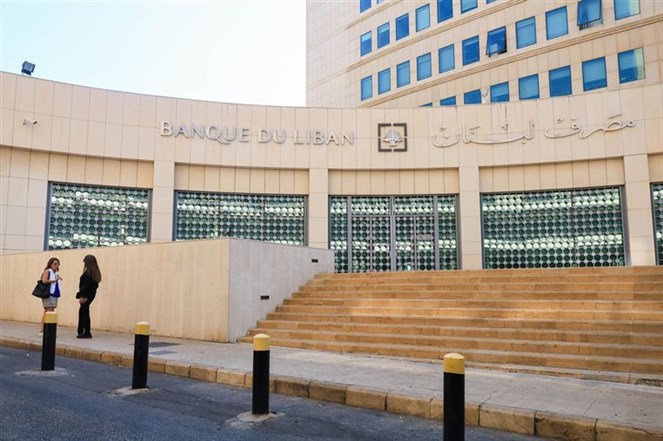 All but cut off from international credit markets and facing dollar shortages at home, Lebanon has come up with another workaround to allow the government to borrow money without raiding the central bank’s reserves.

Local lenders, already the biggest holders of Lebanon’s sovereign debt, will cash out certificates of deposit, or CDs, at the central bank to buy some of Lebanon’s planned Eurobond issue of up to $3 billion, a person familiar with the matter said.

The central bank, known as the Banque du Liban, will subscribe to part of the bond sale, but without directly putting up money, the person said. The funds from local banks will then go toward repaying some of a $1.5 billion bond that matures in November.

The operation buys Lebanon time to find fresh sources of funding but also shows how limited the options are becoming for one of the world’s most indebted countries.

Attempts to secure financial assistance from Gulf allies have so far come up empty and Lebanon’s finances are becoming ever more precarious as it struggles to attract bank deposits, a key source of funding for the government.

Turn for Worse
After a period of continuous growth from 2001 to 2018, private deposits at banks declined by $2.2 billion, or 1.3%, in the first seven months of 2019, before picking up during the summer months, according to Moody’s Investors Service. The rating company has warned that the country’s increased reliance on foreign-exchange reserves could potentially destabilize its decades-old currency peg.

Already, importers are complaining they can’t get dollars to pay for their supplies and a parallel exchange rate for dollars has appeared.

The latest transaction would mark another step in efforts to shift the cost of funding the government to the Finance Ministry from the central bank, as the inflows of hard currency that helped keep Lebanon afloat for generations dry up.

Lebanon has mandated four banks to market the latest Eurobond sale, which is due to be finalized this month, with the central bank allowing lenders to use their CDs to subscribe, Governor Riad Salameh told Arabiya TV earlier this week in Abu Dhabi.

The interest will be less than 14%, according to Salameh -- below, but comparable with -- current market rates. Lebanon’s average dollar yields have almost doubled since February to just under 16%, well into distressed territory.

Lebanese banks, which S&P Global Ratings has estimated hold about 40% of total central government debt, are resisting attempts to make them carry more of the burden. Earlier this year, they rejected a plan rolled out by Finance Minister Ali Hassan Khalil to sell Treasury bonds to them at interest rates significantly below the market level.

The Association of Banks in Lebanon expressed confidence that the challenges could be overcome.

“Banks in Lebanon have in the past and today stand ready to support the central bank,” Salim Sfeir, the association’s president, said in an e-mailed statement. “We have always been part of the solution and we continue to stand on firm ground.”

It’s not the first time Lebanon’s central bank has had to be creative. For three years, it’s been using so called “financial engineering” to manage the country’s debt pile, encouraging commercial lenders to purchase bonds by offering them above-market rates for deposits, while snapping up any government debt they didn’t absorb.

Financial Engineering
The last such effort in late June shored up foreign assets, helping raise gross reserves by about $2 billion. That put the foreign-exchange reserve cover of broad M2 money supply “inside the historical comfort level” of 60% to 70%, according to Goldman Sachs Group Inc.

The expectation is that the latest transaction will raise the central bank’s gross foreign-exchange reserves despite retiring the CDs.

Lebanon’s usable reserves, however, aren’t looking so healthy. They’re projected to drop to $19.2 billion by end-2019, from $25.5 billion a year earlier, according to S&P, far below the threshold it says is the generally accepted minimum adequacy requirement.

To calculate the usable amount, among other items it strips out Lebanese Eurobonds issued directly by the government to the central bank -- including by swapping local-currency T-bills held on Banque du Liban’s accounts for $1.75 billion in November 2017 and $5.5 billion in May 2018.

The central bank has already repaid a little over $3 billion in maturing bonds this year, and Salameh has said the central bank will also redeem the $1.5 billion due next month. The bank has additionally intervened to supply dollars at the official rate to importers of wheat, fuel and pharmaceuticals after a foreign-currency shortage threatened vital industries, putting further pressure on its net reserves.

Market Access
Without measures that reduce the external deficit, Goldman “conservatively” projects Lebanon’s near-term outside financing gap at about $6.5 billion per year. Lebanon has $2.5 billion of Eurobonds maturing in the first half of next year.

“Access to international capital markets has become limited and the BdL has been forced to step in to finance recent redemptions from FX reserves,” Farouk Soussa, a Goldman Sachs economist, said in a report. “This is likely to put further pressure on FX reserves and liquidity.”